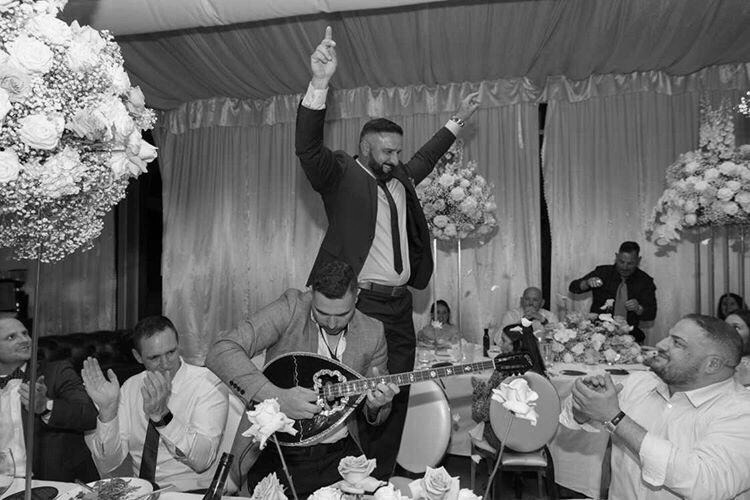 Celebrations are about spending time with your loved ones and cherishing the moments while creating a memory that will stay with you forever. No matter what you are celebrating; whether it’s your wedding, birthday, or a reunion, we bet you want to make it uniquely special for you and your loved ones.

How many times have you been to a party or function where the food, the arrangements, and everything else seem on point, but the celebration feels dull and boring? We have all been there, right?

Ever wondered what makes a celebration a celebration? It’s the music, the universal language that unites everyone irrespective of their place, age, or taste. Even if it’s divided into different styles, genres, and melodies, music is capable of expressing every emotion. A great musical celebration has the power to overpower every flaw, every shortcoming, and literally connect everyone under one roof. Trust us on this: one thing that can shift your dull gatherings to a lively celebration is some good music. It’s that simple.

However, finding the perfect melody for the evening can be a daunting task, considering the limitless styles and genres to choose from. But no worries, just go through this blog, and we promise to give you a tailored musical solution for your event.

How to Get Started?

First of all, you must decide on the theme and mood for your celebration. For instance, a romantic jazz band will fit ideally in a wedding but will it do the same for a professional meeting or gathering? Ask yourself. What kind of music will be relevant for the occasion? You need to have a vision for the special evening.

Look around; try to find inspirations that suit your vision, or look for the latest trends, although not all are that great. In the end, you need to choose something that’s not boring or repetitive but interesting and unique; something that is worth staying and listening to.

We know this seems like a complicated, never ending task, and to some extent, it is. It’s really ironic to go through all these and end up feeling clueless and disheartened about the celebration. But if you want to avoid the complexity without compromising on your celebration, then my friend, you have reached the right place. The new rising trend in music will not only meet your expectations but will also outperform your fantasy.

It’s Greek Bouzouki Entertainment, one of the most versatile music, that will amp up all your moods and themes. Greek music is a perfect blend of western and eastern culture, bringing traditional and modern music elements together.

The beauty of Greek Bouzouki Music

Greek melody is incomplete without Bouzouki, the national instrument of Greece. It’s an instrument having a long neck and a round belly with a fretted fingerboard. The instrument has cultural significance in the Middle East and Asia, and the reason for its success is the possibility of producing plenty of sounds, despite its limited number of strings.

Characterized by the dynamic bouzouki melody, Greek music has garnered worldwide recognition. And this is what you really need for your next function or celebration. Whether it is a wedding or a birthday, the Greek music accompanied by Bouzouki covers it all.

Here are five reasons why you’d need a bouzouki player at your next celebration.

Descended from the Turkish bozuk and closely linked to the Turkish saz and the Asian tanbur, the bouzouki shows were traditionally for dancing and entertainment at social and cultural functions.

As mentioned previously, Bouzouki holds cultural significance in the Middle East and Asia, making it an instrument with a blend of various traditions; one that unites the world by its melody.

It will be a sophisticated idea to have Greek Bouzouki Entertainment at your next event.

The idea of having a Bouzouki show in itself is a unique approach for the celebration. If you are tired of listening to the same celebratory music, again and again, give the dynamic Bouzouki a try. The refreshing plethora of sounds produced by the instrument is hard to forget and will have your guest speak about it for years to come. It is such a small thing that will bring life to your event.

The old traditional instrument brings a new, uncommon melody of its own. The best part is it can also be a part of the contemporary music style. It is a perfect blend of traditional and modern music, bringing diversity at its peak.

Hiring a Greek Bouzouki Entertainment can be your best move if you want to make a statement. Greek bouzouki music is quirky and peculiar in a good way that will have an everlasting impression upon your guests.

Bouzouki is a versatile instrument with a plethora of sounds and combinations well suited for traditional as well as contemporary melodies.

The prime reason for going for Bouzouki shows is because the instrument is highly customizable in terms of melody or pairing it with other instruments. The control is in your hands; you’ll be able to modify and tailor the music you want in the celebration, whether it’s of any genre or style. This is the benefit of such an instrument that is capable of blending itself in numerous genres while keeping its uniqueness.

Now, you might wonder where to get the best Bouzouki player in the business? Don’t worry, we’ve got you covered!

Where to get the Best Greek Bouzouki Entertainment?

Introducing one of the best Bouzouki players, internationally acclaimed Australian bouzouki player, and entertainer, Mr Tommy Tsonis. Tommy has been playing in the industry for over 20 years, performing for over 5000 events in Australia and international stages combined.

Tommy Tsonis is distinguished for his unparalleled expertise with the Bouzouki, as well as his extraordinary showmanship. Among Greek music royalty, he is recognized as a sophisticated, skilled, and dynamic virtuoso. He is sought after in Australia and overseas for his unique vogue that fuses traditional Greek masterpieces, modern songs, international music, and pop.

Tommy has been on the musical journey since the little age of seven when he started playing; he was a born performer back then. Tommy’s love for the instrument with great determination to master the Bouzouki through countless hours of practice has garnered him the respect and recognition of well-known musicians, singers, and artists across the globe.

Performing as a teenage artist in Sydney and flying to Greece each year to test and compare his skills represents how Tommy became one of the most prominent performers in the world, giving his trademark, unique sounds of the Bouzouki to the world.

In 2000, Tommy performed at The Sydney Olympic Games official ceremony to launch the torch relay – a career recap that depicts Tommy’s passion for the Bouzouki, his love for Greece and Australia. Not to mention, Tommy has also performed at multiple official cultural events, including Greek festivals and Glendis, to support the Greek community.

Over the past decade, Tommy has voyaged Greece by working with some of the biggest names in the Greek music industry, such as Giannis Ploutarhos, Stathis Aggelopoulos, Antonis Vardis, Giorgos Tsalikis, Alekos Zazopoulos, Makis Christodoulopoulos, Zigzag, Nikos Tzoumas, and numerous others. He has been the chief guest at all of the significant music clubs in Greece, performing at the Romeo, Fix, Asteria, Posidonia, and Frangelico.

Tommy Tsonis is a brand renowned for his exceptional skill and enthusiastic style, setting his trademark. He is also known for his versatile approach to the traditional Greek Bouzouki and the classics, contemporary hits, and music of all genres. His unique style has reconstructed the legendary sounds of classic Bouzouki and made it an instrument of the future.

In the words of Tommy Tsonis, “Being a Greek bouzouki player in Sydney is something that I wouldn’t trade for anything in the world. It started off as a dream, 25 years ago, and it quickly became my life. Today as a passionate full-time entertainer, I am honoured to have been invited to perform for couples and their guests both here and overseas travelling to the USA, Canada, South Africa, and Greece.”

Tommy’s solo career was rare, a fantasy for other artists. Tommy performed at official, corporate and special events, including weddings, engagements, entertaining brides, grooms, families, friends, guests, and audiences at the most meaningful celebrations of their lives. Tommy is an absolute maestro when it comes to entertaining the public and giving them the Bouzouki shows of a life that’s worth cherishing for years to come.

In 2010, Tommy took it to the next level and founded Tommy Tsonis Entertainment with a group of greatly skilled musicians and artists. They offer a bespoke lineup of performances that entertain each event, whether it be a marriage, a private celebration, or corporate events. Having worked with the artists and musicians on his roster for many years, Tommy promises their talent, their experience, their professionalism, and a seamless performance every time they put up a show.

Tommy and his team have strived to achieve perfection. By adding the skill of the team and the musical expertise of Tommy, they have been able to form multi-cultural styles merging the dynamic Bouzouki with the percussive sounds of the Zaffet drums. This energetic combo elevates the celebration, especially if it is a wedding celebration.

If you are searching for entertainment for your upcoming wedding or event, look no further. Tommy Tsonis Entertainment offers the most creative and tailored solutions. Tommy is known for his hands-on way when creating the perfect entertainment lineup for any occasion. He is an experienced, trustworthy, dedicated artist, who always ensures to provide the absolute best to the audience and works with the highest professionalism.

The team commits to one thing, and that’s making your special day even more special and memorable while exceeding your expectations. We offer numerous services when it comes to creating musical shows.

The team, accompanied by Tommy, Australia’s leading bouzouki player, makes sure to offer the guests a party of a lifetime! Witnessing the dynamic and lively Greek Entertainment on stage is an unforgettable experience. Tommy’s custom bouzouki programs have always been a focus at marriages, engagement parties, and even festivities.

Tommy’s experience of over two decades has resulted in a unique Greek wedding entrance show comprising Greek Bouzouki shows, Zaffet Drummers, Bongo Player, Klarino Player, and the cheer of your guests leading the bride towards her dream wedding entrance. Bouzouki Greek wedding entertainment creates a perfect atmosphere for weddings by offering an ideal blend of beauty and excitement.

The Bouzouki shows accompanied by the bongo players supplements the energy of the performance and will have your guests dancing on their heels all evening. The Veteran Tommy Tsonis has truly mastered the art of mixing bongo sounds with Bouzouki, creating incredible melodies like no other.

Specializing in Greek and Lebanese weddings, the Zaffet Drummers Sydney create customized wedding entrance shows to make a lasting memory, all under the supervision of Tommy Tsonis.

Well, speaking of a wedding, it’s incomplete without a Greek DJ, who can play enticing Greek, English & Italian melodies. Our professional DJs, under the guidance of Tommy Tsonis, have been in the industry for years. Our MCs will delight your audience with their vibrant personalities while conversing in both fluid Greek and English.

From the bride and groom’s vibrant wedding entrance to the dancing of the kalamatiana, syrta, tsiftetelia, and zeibekiko, Greek entertainment has it all! It is the perfect musical choice to entertain guests of all ages.

For bookings and enquiries for Tommy Tsonis Entertainment or even a complimentary consultation with Tommy, feel free to contact us today via our bouzouki website.

Choose from a fine selection of Greek Bouzoukia and more.